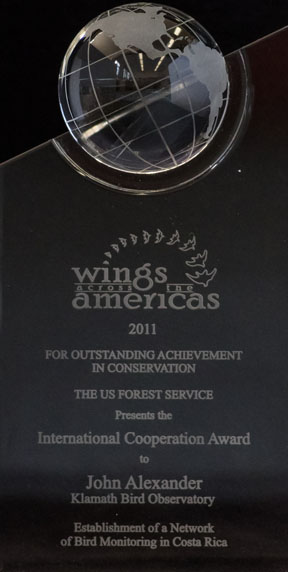 A diverse group of conservationists, including KBO’s Executive Director John Alexander and Research Advisor C. John Ralph were recognized for their effective collaboration with the prestigious Wings Across the Americas International Cooperation award in 2011. This award recognizes the work of KBO
and partners in building capacity for bird monitoring and conservation in Costa Rica through the development of the Costa Rica Bird Observatories.
The awardees included:
C. John Ralph, Pacific Southwest Research Station, US Forest Service
Carol Lively, International Programs, US Forest Service
John Alexander, Klamath Bird Observatory
Pablo Elizondo, Costa Rica Bird Observatories
Roxana Silman, Sea Turtle Conservancy
Emma Harrison, Sea Turtle Conservancy
David Godfrey, Sea Turtle Conservancy
Rodrigo Gamez, Instituto Nacional de Bioversidad
The Elizondo Family
Leo Salas, Point Reyes Bird Observatory
Certificate recipients of the award included:
Stephen Rumsey, The Wetland Trust
Judy Richardson, San Vito Bird Club
Jared Wolfe, Louisiana State University
Conservation needs data. Land managers and scientists cannot protect birds they know nothing about. In Latin America, little is known about the ecology of Neotropical migrants on their migrating and wintering grounds, nor about the effects of climate change or the role of resident species in the ecosystem. Latin American countries have in recent years begun to establish bird monitoring programs, including constant-effort mist-netting stations. But the data they produce isn’t sufficient by itself.
A big leap in the collection and sharing of data is found is the establishment of the Network of Bird Banders of Costa Rica, the “Red de Anniladores de Aves de Costa Rica”. The first of its kind in Latin America, the network has been a model for others in the region, and facilitates cooperative research projects such as data sharing through the Landbird Monitoring Network of the Americas (LaMNA). The Network and LaMNA are both integral parts of The Western Hemisphere Bird Banding Network (Red de Anillamiento de Aves del Hemisferio Occidental), and they also serve a primary coordinating role the this hemispheric network.
With funding from US Forest Service International Programs, private foundations and individuals, the program established and staffed a full-time director of the Costa Rica Bird Observatories and its monitoring stations in several regions of Costa Rica. The bird monitoring station in Tortuguero, established by the program in 1994, is one of several stations now under the umbrella of the newly-formed Observatories. This continues more than 15 years of monitoring and training dozens of Latin American biologists in several habitats on the Caribbean Coast, San José, and the Highlands.
Results are being used by bird researchers, land managers and decision makers in Costa Rica and throughout the Americas for understanding resident and migratory species. Several publications appear annually, both in Latin America and elsewhere, using the data generated by the Network and the Costa Rica Bird Observatories. Over 4,000 annual visitors interact with the bird monitoring process and educational bird related activities at our bird observatories. It has fostered investigation into the effects of climate change on wintering migrants. The tool developed for tracking bird bands is being used by other developing bander networks, such as in Peru and Brazil. This effort will continue to improve our understanding of the biology and life histories of Costa Rica’s little-studied resident species, leading to their improved conservation.
CLICK HERE to learn more about the US Forest Service International Programs’ Wings Across the Americas Program.