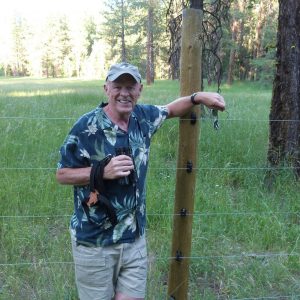 Dick first joined the KBO Board in Spring 2005.  He served as Board President from 2007 to 2009, when he was elected as Board Chair of the American Birding Association, a position he held until late 2010. Shortly after completing those duties, he was re-elected as KBO’s President in December 2010 and served again until 2013.

Dick describes himself as a continuing student of birds and birding.  He volunteers as a birding tour leader for several organizations, including KBO.  A raptor enthusiast, he enjoys leading hawk watching trips to southern Oregon’s Klamath Basin.  He teaches a “Hawks” class at a local university, and gives raptor presentations to community groups in both Oregon and California.  He is the originator of the San Francisco Bay Flyway Festival’s popular “Hawk Heaven” outings, and teaches the Intermediate/Advanced Raptor ID Workshop at the annual Winter Wings Festival in Klamath Falls.

Dick, a former Mayor of Sonoma, CA, has served as Chair of Sonoma County’s Recycling Agency, and board member of such diverse groups as a Fire and Rescue Authority, the Sonoma Valley Vintners & Growers Alliance and the Charles Schwab Cup Golf Championship.  He is an active birder with over 750 species on his ABA-area list.

Dick has an M.S. in Computer Science and extensive experience in engineering program management.  Prior to his retirement, he created a U.S. State Department-sponsored program that brought program management training to former Soviet Union and Warsaw Pact nations.