In 2020, we expanded the project with the deployment of archival GPS nanotags to track non-breeding season movements of Oregon Vesper Sparrows breeding in the Rogue Basin. We successfully captured 10 males at our Howard Prairie study site and placed GPS backpacks on them using a leg-loop harness.

Since the GPS tags are very small, and the batteries are not powerful enough to transmit data, tagged birds need to be recaptured the following year to retrieve the stored data. In 2021, we located and recaptured four of these GPS backpack-wearing males! Three of them had fully functioning tags with fall migration and/or wintering locations recorded, and we look forward to sharing these exciting new results soon. This subspecies has never been tracked year-round before, and our work will uncover important information about the migratory routes and overwintering areas used by this imperiled subspecies. This will help answer a question critical for future conservation efforts – what challenges might these birds be facing during migration and winter?

To read more about this effort and see photos, check out the Klamath Call Note blog. Our GPS research was made possible with funding from the Carpenter Foundation and Oregon Wildlife Foundation. 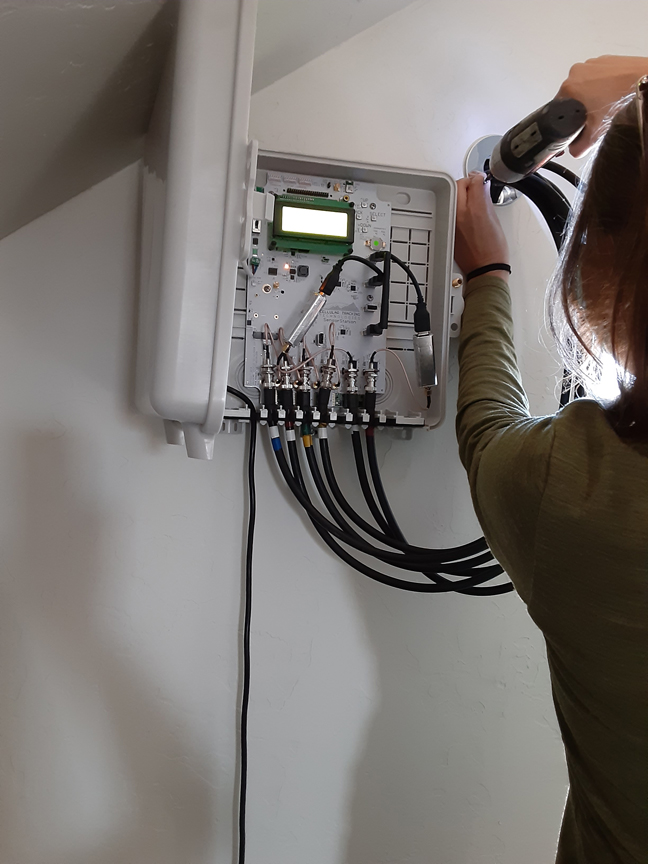 2020 also saw the installation of the very first Motus station in Oregon at the Vesper Meadow Restoration Preserve, supported by Montana’s MPG Ranch. The Motus Wildlife Tracking System is a collaborative research network using automated radio-telemetry arrays to study the movements of small organisms. Tags are small enough to be carried by birds, bats, and even bees. Motus tags emit a radio frequency that can be detected by a nearby Motus station anywhere in the world. Future research plans include tracking local Oregon Vesper Sparrow movements using Motus technology at this site, and migratory movements as the western Motus network develops. Further, our Motus station will provide location data for other research projects, recording any tagged organism that passes by on its own migratory journey. The east coast has a well-established Motus network that has led to exciting new discoveries in animal migration. We are excited to be on the forefront of developing a Motus network in the western U.S.

In 2021, we searched for nests of this ground-dwelling bird at Vesper Meadow, and placed Motus-compatible LifeTags on 12 Oregon Vesper Sparrow nestlings that were nearly ready to fledge. LifeTags are solar-powered and emit a signal every few minutes during daylight hours for the lifetime of the bird.

The automated “resighting” and location estimation from this new technology will help us study habitat use, movements, and survival of young birds during the vulnerable post‐fledging period, and explore dispersal of returning birds to nearby meadows next spring. We set up an array of 18 Motus nodes around the edge of Vesper Meadow to supplement our main Motus station there. Four of the nodes formed a mini-grid around two of the nests with tagged nestlings, and this will serve to pilot the use of this technology to track precise fledgling locations. We collected tens of thousands of detections of our tagged fledglings from the node network over the months of June – October, and we will analyze those data this winter. A handheld telemetry unit will allow us to more easily find any tagged birds that disperse to other nearby meadows next spring. In addition to enhancing our Vesper Sparrow research, the Motus station at Vesper Meadow has detected two Lewis’s Woodpeckers migrating from MPG Ranch lands in Montana, one Swainson’s Thrush that was banded in British Columbia, and one Western Sandpiper and Semipalmated Plover also from British Columbia – so the station is assisting other researchers with their migration tracking projects as well! Our Motus station, node network, and tagging effort were made possible by MPG Ranch, USFWS, Oregon Wildlife Foundation, and private donations.

Daniel Thiede, a local multimedia artist, is photographing and recording the project and putting together a short-film documentary.  The documentary will be an engaging way to educate the public about this declining species.