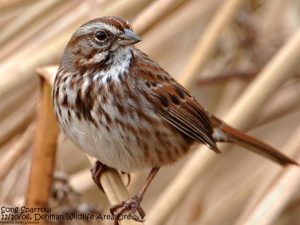 The Song Sparrow (Melospiza melodia) is a familiar bird year round in our region. It has the conical, seed-crunching bill typical of sparrows, and can be identified by its brown cap, gray supercilium (“eyebrow”), brown streak extending behind the eye, and strong brown lateral throat stripe. Additionally, it has heavy brown striping along the sides of its white or gray breast. These brown streaks converge on its chest, just below the throat, to form a messy breast-spot. The Song Sparrow generally eats seeds and sometimes berries, but supplements its diet with insects.

During the spring, male birds can be seen chasing females in a courtship dance, with head and neck held high and wings fluttering rapidly. Song Sparrows are generally monogamous, and some pairs will even stay together from one breeding season to the next. After choosing a mate, a female Song Sparrow will build a cup-shaped nest, usually on the ground or in low shrubs, and preferably in a densely vegetated riparian area. She lays a clutch of 3 or 4 pale blue or green eggs, patterned with reddish-brown markings. Song Sparrows are a frequent victim of cowbird parasitism, and have been known to recognize and chase off cowbirds. The female broods the eggs, and the pair collaborate in caring for the hatchlings. After about 9-12 days, the young fledge; at this point the male takes over their feeding so that the female can attend to a new clutch of eggs. (The pair may raise two, three, or even four clutches in a single season!) About 21-30 days after hatching, the young disperse to make their way on their own.

This article can be found in KBO’s Fall 2005 newsletter.

The Birder’s Handbook by P.R. Ehrlich, D.S. Dobkin, and D. Wheye, and from The Sibley Guide to Birds by D.A. Sibley