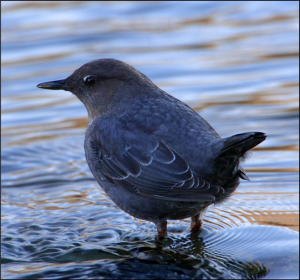 American Dippers (Cinclus mexicanus), sometimes called Water Ouzels, are one of five species worldwide in the family CINCLIDAE, and the only cinclid found in North America. Dippers are the only truly aquatic species of songbird.  As such, they spend a majority of their lives in or near water. Typically, American Dippers are found in fast-flowing mountain streams of the western United States, Canada, and Mexico, although they can occasionally be found along coastal and desert streams.

Unlike most aquatic birds, dippers do not have webbed feet. Instead, they have short, rounded wings built for “flying” underwater and strong feet that can grip rocks and pebbles as they forage along streambeds.  Additionally, dippers have evolved a flap of skin attached to their nostrils that aids underwater life; when a Dipper sticks its head in the water and faces upstream, the water’s movement closes the flap, preventing water from entering the dipper’s nostrils.  American Dippers, like ducks and other waterfowl, are densely feathered and possess an enlarged europygeal gland (i.e., a gland that produces oil used to waterproof feathers during preening).  Also like ducks, American Dippers only molt once per year. Finally, Dippers have extra hemoglobin in their blood, allowing their blood to be more oxygenated.  These adaptations make dippers well-suited to life in rushing streams, where they forage underwater for aquatic macroinvertebrates (e.g., snails, insects, insect larvae), small fish, and fish eggs.

The nests of American Dippers are constructed in two layers; the outer layer consists of a sphere made of moss, and the inner layer is a cup made of grasses, leaves, and bark.  Nests are built primarily by the females and they are usually located on in-stream rocks, water-side cliff faces, or behind waterfalls, to avoid flooding and predation.  Suitable nesting habitat appears to be a common limiting factor for dipper reproduction.  The introduction of nest boxes, bridges, and other man-made structure with ledges near water has greatly increased the number of dipper nests in some parts of their range.

Dippers have an extraordinary and exuberant song, which explains in part the famous affinity of naturalist John Muir for these small gray passerines.  Both males and females sing to nestlings.  Often this singing occurs after feeding. Many researchers believe these post-feeding songs developed in American Dippers as a method of teaching young to sing. In many passerines, songs are learned from their parents or neighbors after fledging.  Due to the often loud and turbulent river sounds found in dipper territories, songs may be difficult to learn in “typical” settings.  When singing to nestlings, the parents often perch on a rock below the nest, bodies facing sideways to the nest and head tilted.

Dippers earned their names due to the dipping and bobbing behavior displayed by birds perched on rocks above the waterline.