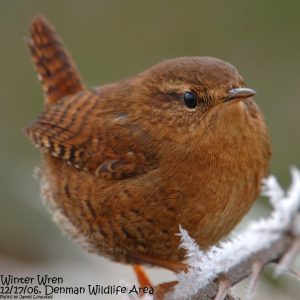 The Pacific Wren (Troglodytes pacificus) is North America’s smallest wren, measuring only about four inches from the beak to the tip of its tail. This wren has a rich rufous-brown body, pale legs, dark bill, and a pale eyebrow, and the most remarkable attribute, perhaps, is its joyous and beautifully complex song, which can be heard near streams in moist coniferous forests throughout the Pacific Northwest.

In 2010 the Pacific Wren officially became its own species, having been formerly grouped with the Winter Wren (T. hiemalis) and what is now recognized as the Eurasian Wren (T. troglodytes). The Winter Wren occurs primarily in the eastern US and Canada, and the Eurasian Wren occurs throughout Europe and into parts of Asia. The split of the Winter Wren into three species occurred as a result of years of research that revealed, among other findings, that the eastern and western US populations are genetically distinct and hybridization is rare where their ranges overlap. Analyses of songs have shown that the Pacific Wren has a distinct and rapid song comprised of up to 36 notes per second, whereas the song of the Winter Wren is significantly slower and more similar to the song of the Eurasian Wren.

The Pacific Wren associates closely with moist coniferous forests. Important breeding season habitat contains old-growth trees, fallen logs, and woody debris, and they tend to occur near rivers and streams in areas with low levels of habitat fragmentation. That said, the Pacific Wren can also occasionally be found in deciduous forests, at elevations over 3,500 meters above sea level, and even on cliff faces.

Pacific Wrens have been called “nook and cranny” nesters due to their creative and secretive placement of nests in cavities of wood, rocks, and other materials. When cavities are not available, males will build their nests inside clumps of moss on tree branches, underneath root masses of overturned trees, or under stream banks within their territories. Females choose one of the available nests and complete nest construction by adding a soft lining of feathers or hair.

Males sing complex songs throughout the year; these songs last 5-10 seconds and in some populations the average male has a repertoire of 21 song variations. To attract a mate, a male may perch above a female and sing to her while fluttering his wings and moving his tail from side to side. A male will also show an interested female the nests he has built by flying through the territory and becoming louder and more excited when near a nest. Next, he will enter and exit the nest several times, often followed by the female.

Populations that breed at high elevations tend to migrate to lowlands after the breeding season, especially during high snow years. Many populations, however, including those along the coast from the Aleutian Islands to central California, are resident year-round. For resident birds, territory boundaries are more or less consistent throughout the year, although they tend to shift and often decrease in size during winter.

The Pacific Wren is a Partners in Flight focal species for western Oregon and Washington, chosen because it is a good indicator of complex forest floors in coniferous forests. Populations in northwestern California’s Douglas fir forests have declined by an estimated 47% from historic levels, due to logging of old-growth forests, increased forest simplification and fragmentation, and reductions in the number of snags and downed logs. Thus, there is some concern for the Pacific Wren. The Partners in Flight Conservation Plan for Coniferous Forests of Western Oregon and Washington contains management recommendations designed to benefit the Pacific Wren as well as a variety of forest birds that use similar habitat.