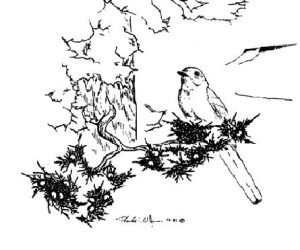 Distribution:
Generally found in mountainous areas throughout the west from central Mexico to Alaska.

Feeding:
Flycatches (catch insects in the air) from exposed perches, in the non-breeding season they feed mostly on berries.

Conservation:
Populations have increased over the last 30 years, possibly due to increased forest openings.

Behavioral Notes:
Males sing from exposed perches but are quite while foraging close to the ground with mates. Aerial songs are only given by males and have been described as being complex, soft, and flute-like at times, often resembling the sound produced by the axle of a wagon in need of greasing. (Gabrielson and Jewett 1940)

This article can be found in KBO’s Spring 2005 newsletter.

Birds of Oregon, A General Reference, Marshall et. at.