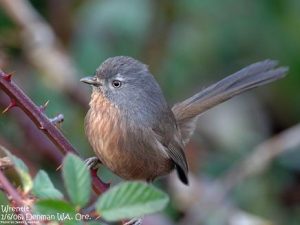 Many birders may hear the male Wrentit’s distinctive, loud song similar to a Ping-Pong ball bouncing on a table, but never see one. The Wrentit (Chamaea fasciata) is a secretive bird that prefers to remain hidden within dense brush and scrub, rarely crossing open areas. This year round resident in the Klamath-Siskiyou Bioregion is limited in distribution to the West Coast, bounded to the north by the Columbia River, south by the deserts of Baja California, and inland by the Sierra Nevada and Cascade Mountain Ranges.

The Wrentit is the only species of its family found in North America. This species received its common name from the original specimens considered at the time to resemble a wren and also a tit (British name for chickadee). Described as the most sedentary species of birds, its breeding territory ranges from 1-5 acres. Wrentits form longterm monogamous pair bonds. Both sexes defend the territory throughout the year, build the nest, incubate the eggs, and care for the young. It is one of the only songbirds that sings throughout the year.

The Partners in Flight (PIF) North American Landbird Conservation Plan lists the Wrentit as a Species of Continental Importance in the Pacific Avifaunal Biome (Pacific coastline of Canada and U.S.) because 97% of the global population is within this biome. Wrentit population declines have been measured and are related to effects of forest management, loss of riparian woodlands, and encroachment into oak, chaparral, and coastal scrub habitats. PIF’s continental population objective is to increase the global population by 50%.

In 2005, KBO banders captured 141 Wrentits (72 of these were recaptures from 2005 or previous years). Wrentits were captured this year during our education programs at North Mountain Park, Wildlife Images, and Willow Wind. Through such programs, KBO educates students and community members, allowing them to experience close-up encounters with birds they may not otherwise see. The next time you are birding in a
riparian scrub area, listen for the sound of a Ping-Pong ball bouncing. If you are lucky, you might just see a Wrentit hopping through the shrubs. If not, remember, you can always join our next visit to a banding station.

This article appears in the Fall 2006 KBO newsletter.