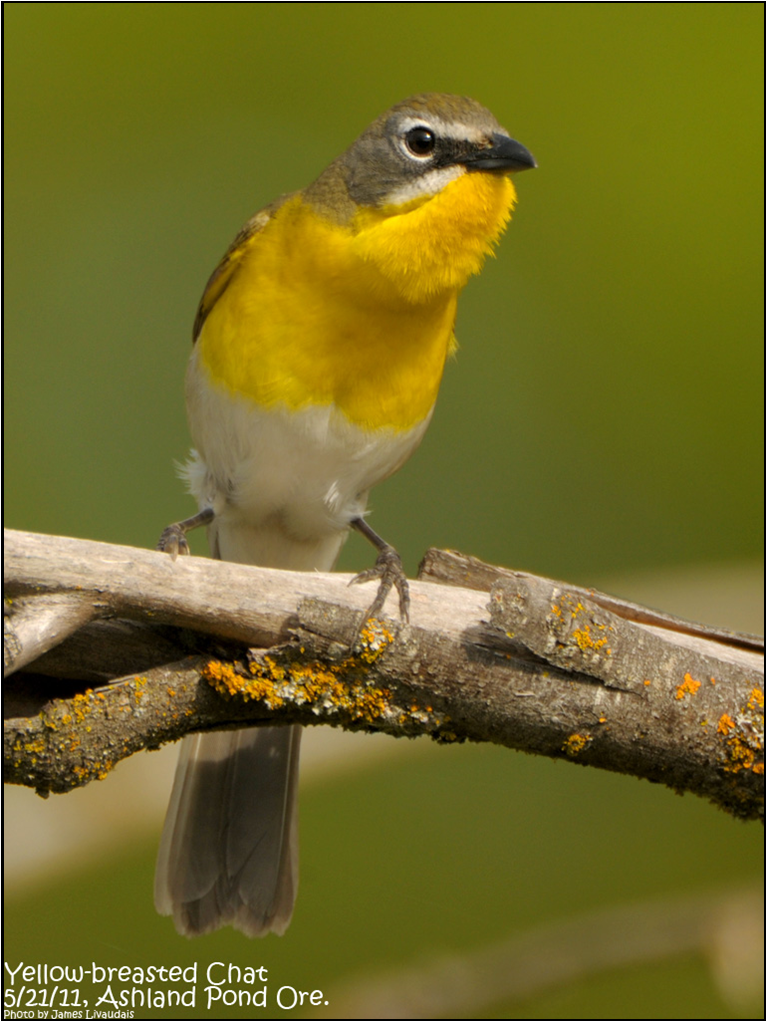 The Yellow-breasted Chat, one of our more charismatic riparian species, plays an important role in our region’s cultural and ecological heritage.  It is a Partners in Flight focal species for western riparian habitats, it is the “Salmon Grandmother” in local Native American mythology, responsible for bringing salmon to the Klamath River, and it is KBO’s official mascot.

The chat has long been a controversial figure in avian taxonomy.  Linnaeus first placed it with the thrushes in the 1700s but unsatisfied 19th Century biologists decided it was best classified as a wood-warbler, a classification that remains today. Since then the species has withstood countless attempts by skeptical taxonomists determined to label it as everything from a vireo to a tanager to even a honeycreeper!  However, despite a barrage of morphological, behavioral, and molecular studies, the species has steadfastly remained in Parulidae, a proverbial “black sheep” within one of North America’s most beloved avian families.

Breeding season is the best time to observe chats, as males defend territories through conspicuous song and behavioral displays.  Of particular note is the in-flight display males perform to attract females.  After singing for an extended time from a high, exposed perch, males will make a gentle, undulating flight to a second perch, their wings flapping vertically like those of a butterfly, tail spread wide, and legs dangling, all the while vocalizing loudly.  Their song is highly recognizable, being a collection of whistles, burps, and mechanical noises.

Chats have a bifurcated breeding range separated by the Great Plains.  The western subspecies, known as the Long-tailed Chat, occupies dense riparian thickets dominated by willows and blackberries.  In the east chats have a similar affinity for complex understory structures and are abundant in scrub-shrub habitats and regenerating clear cuts.  Early successional habitats like these are highly ephemeral, as they depend on natural and human-induced disturbance regimes and rapidly transition into mature forest.  Hence, eastern chat population trends vary widely, likely reflecting the stochastic nature of the species’ preferred habitat type.  In Oregon and California populations have remained relatively stable since the 1960s, which may reflect progressive land use policies that conserve riparian habitats in both states.  Even so, riparian habitat remains rare and imperiled in the west, and chats are frequently used as a focal species for assessing riparian ecological function by KBO and other conservation organizations.

Chats are Neotropical migrants and spend much of the year on their nonbreeding grounds in Mexico and Central America.  Unfortunately, little is known about the migratory linkages that exist between the breeding and wintering grounds, what ornithologists refer to as connectivity.  Understanding the resource requirements of bird populations throughout the annual cycle is critical for implementing full life cycle stewardship for chats and other migratory species.  With the emergence of new technologies that are able to track small songbirds over large distances, such as light-level geolocators, we may yet learn more about the full life cycle of this enigmatic member of the Klamath-Siskiyou avifauna.