In the West, Forest Bird Populations Are Down, but Klamath Bird Observatory and Partners Offer Solutions 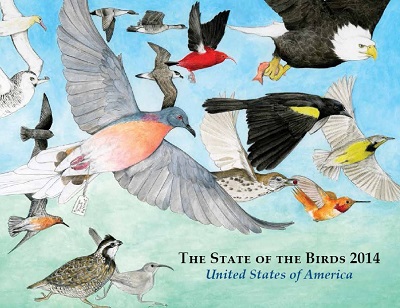 The nation’s top bird science and conservation groups have come together to publish State of the Birds 2014—the most comprehensive examination of long-term trend data for US birds ever conducted. The authors call the results unsettling, an alarming declaration that comes as we stand upon the 100th anniversary of the extinction of the Passenger Pigeon—once one of the most abundant birds in the world. The good news is that the report reveals that in areas where strong investments in science and conservation have been made, bird populations are recovering.

Klamath Bird Observatory, a science-based non-profit organization that achieves bird conservation in the Pacific Northwest, has contributed to this year’s State of the Birds report through staff participation on the report’s Science and Communications Teams. Klamath Bird Observatory has offered a notable perspective to these annual reports starting with the initial report published in 2009; primarily, we inform content relating to long-term bird monitoring, conservation opportunities, and western forest birds.

The national report finds bird populations declining across several key habitats. Most birds of concern fall into the following categories: seabirds, shorebirds, Neotropical migrants, Hawaiian forest birds, and birds using aridlands, grasslands, forests, or coastal habitats. Aridland birds appear to have the steepest population declines of any group of birds by habitat type; there has been a 46 percent loss of these birds since 1968, according to long-term monitoring data on a suite of 17 bird species that breed in desert, sagebrush, and chaparral habitats in the West.

Western forest bird population declines are also of concern; their populations are down 20 percent since 1968. Both early successional species (such as Rufous Hummingbird and Wilson’s Warbler) and mature forest species (such as Vaux’s Swfit and Cassin’s Finch) are declining, while species dependent on oak woodlands (such as Oak Titmouse) are showing the steepest declines. Despite these general trends, there are examples of dedicated partnerships turning the conservation tide; in fact, two conservation success stories from our region are highlighted in the State of the Birds 2014 report. These are:

The strongest finding in State of the Birds 2014 is simple: conservation works. For example, alarming declines in grassland bird populations have leveled off since 1990 due to significant investments in grassland bird conservation. Bald Eagles, Brown Pelicans, Peregrine Falcons—all species once headed the way of the Passenger Pigeon—are now abundant.

In the Pacific Northwest, Klamath Bird Observatory and partners are poised to advance bird conservation on public lands by participating in the management planning process with the two major landholding agencies in the region: the US Forest Service and the Bureau of Land Management. Klamath Bird Observatory offers expertise in the application of comprehensive datasets and a series of Decision Support Tools maintained within the environmental datacenter Avian Knowledge Northwest. The inclusion of bird monitoring and bird conservation science into large-scaled management planning will not only help address the conservation needs of western forest birds in the Pacific Northwest, it will help natural resource managers to better implement forest restoration priorities, resulting in healthier, more productive land and water for birds, other wildlife, and for us.

State of the Birds 2014 United States of America will be available online at http://www.StateoftheBirds.org.  The State of the Birds 2014 report release press conference will be broadcast live from the Smithsonian Castle in Washington, DC via a streaming webcast Tuesday September 9th from 10:00 to 11:00 am Eastern (7:00 to 8:00 am Pacific); tune in at http://www.smithsonianscience.org.