American naturalists, including John James Audubon, remained ignorant of the species for another decade until specimens were collected by Edward Kern, the artist on Colonel Fremont’s expedition to California in 1846. Kern observed, as it happened, that the Ferruginous was very good eating. 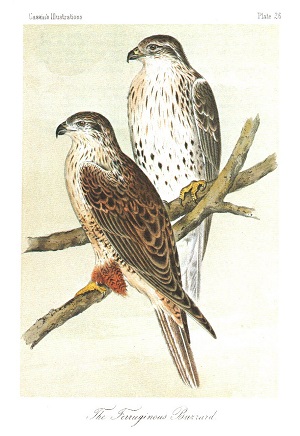 When John Cassin published his lone volume of Illustrations of the Birds of California, Texas, Oregon, British and Russian American (1856) his book contained the first colored illustration of the Ferruginous Hawk. It was known at that time as “Ferruginous Buzzard.”

Cassin wrote, “Since Mr. Kern, the only American naturalist who has noticed this bird is Dr. Heermann, who has met with it during both of his visits to California…”

Then he quotes from Heermann’s journal: “During a previous visit to California, I had seen this species in the valley of the Sacramento river, and had considered it as rare in that section…but during the recent survey…in the southern part of the state, I found it very abundant, and on one occasion saw five or six individuals in view at the same moment, in the mountains, about sixty miles east of San Diego…

“As large tracts of that country inhabited by this bird are often entirely without trees, it alights on the ground or on some slightly elevated tuft of grass or stone, where it sits patiently for hours watching for its prey….”

Even as late as 1874 Elliott Coues wrote about the dispute over whether the Ferruginous Buzzard was truly a separate species. There were some who thought it was a form of the Rough-legged Hawk. Both have insulating feathers along their legs. 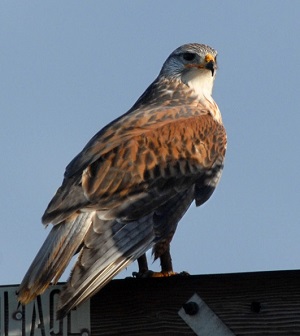 In Birds of the Northwest, A Handbook, Coues declares the Ferruginous to be a separate species and later decades have proven him correct.

Coues wrote, “According to me observations…the Ferruginous Buzzards have no partiality for watery places, thus differing from the eastern Rough-legs. About Fort Whipple [Arizona] the birds mostly resorted to the open plains and the grassy glades intervening between patches of pinewoods…

“This hawk is known as the ‘California Squirrel Hawk’ in some localities…the name is gained from their feeding extensively, in California upon ‘ground squirrels’….”

The Ferruginous Hawk is one of the many species that can be seen during Klamath Bird Observatory’s Mountain Bird Festival, to be held May 30th – June 1st in Ashland, Oregon in 2014.