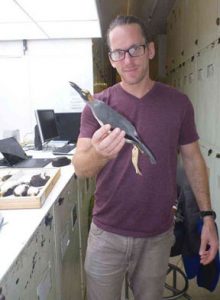 Klamath Bird Observatory is proud to announce that Jared Wolfe, KBO’s Post-doctoral Fellow, was awarded the prestigious Cooper Ornithological Society’s 2015 Young Professional Award. The recognition was awarded to Jared based on his track record of producing meaningful science focused on the impacts of climate and habitat change on tropical and temperate birds. In addition to his science, Jared was recognized for his contributions to conservation and capacity building by co-founding the Louisiana Bird Observatory and teaching bird banding and statistical courses throughout Africa, and North, Central and South America. As the 2015 Young Professional Award recipient, Jared delivered a plenary address during the Cooper Ornithological Society’s and American Ornithologists Union’s 2015 meeting this past July. Jared’s plenary discussed his ongoing research into the ecological value of second growth and forest fragments for bird communities in Amazonian and Congolese forests where bird species within the same ecological guilds respond to habitat disturbance in similar ways irrespective of their evolutionary relatedness. In addition to his ongoing research in the tropics, Jared is currently working with KBO and the US Forest Service examining how bird communities on public lands in Oregon and California are responding to an increasingly volatile climate.