KBO is growing: Announcing our expanded conservation delivery capacity to be led by Jaime Stephens in her new role as KBO’s Director of Conservation

Klamath Bird Observatory (KBO) has seen incredible progress in our efforts to advance science-driven conservation. This has come as we are seeing growing public awareness of the environmental crisis unfolding around us. The Three Billion Birds Lost movement (#BringBirdsBack) brings broad attention to recent science suggesting that we have lost one in four birds since 1970. While alarming, science also shows that when we invest in conservation, conservation works for birds and people.

Over the past decades, much of KBO’s work has focused on Pacific Northwest forests, where nearly half of the associated bird species are in decline. Our oak woodland forests host some of our most at-risk bird species. Over the past 50 years, we have seen dramatic losses in oak and associated prairie habitats. What remains faces many threats, including the interruption of low-severity fire cycles. There is an urgency at this moment, and the time is now to take action to recover forest bird populations while increasing the resilience of western forests, specifically oak woodlands. 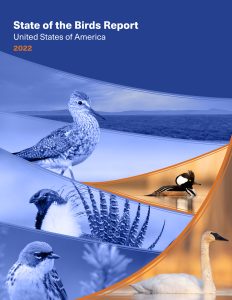 “As KBO grows, we must continue adapting our organizational model to meet new opportunities to scale up our science-driven bird conservation efforts. As highlighted in the 2022 State of the Birds, there is an urgent need to address the Three Billion Birds crisis. With nearly half of our western forest bird species in decline, we must act now, and that is exactly what we are doing. New investments in forest restoration efforts through the Bipartisan Infrastructure Law, the America the Beautiful Initiative, the Oregon Watershed Enhancements Board’s Focused Investment Program, and other anticipated funding opportunities present KBO with an unprecedented opportunity. We are poised to help guide these new investments in forest restoration to ensure they pay off in measurable bird conservation outcomes. Jaime Stephens is a respected regional and national conservation leader, and she is the perfect person to take on this Director of Conservation position. In her new position, Jaime will be pioneering a game-changing approach identified by the Partners in Flight Bird Conservation Initiative as a priority next step that must be taken if we are to address the Three Billion Birds crisis. By developing a new conservation delivery program area at KBO, we will be helping to develop a novel model of conservation action.” John Alexander, KBO Executive Director.

To align KBO’s staffing to meet this forest bird conservation need, we are developing a new conservation delivery program area to help us further focus and scale up our efforts to translate science into even more conservation action. This new program area is poised for success because Jaime Stephens, who has been a leader at KBO for over 20 years, will be taking on a new role as KBO’s first Director of Conservation. Jaime has served as KBO’s long-time Science Director for many years, leading our extensive monitoring and research efforts. As the Science Director, Jaime has worked tirelessly to develop the partnerships and deliver our science, helping to grow KBO’s direct involvement in on-the-ground conservation efforts. These efforts have reached a level that warrants the creation of this new position.

As KBO’s Director of Conservation, much of Jaime’s work will focus on the Klamath-Siskiyou Oak Network‘s efforts to implement restoration actions in the oak and prairie habitats of southern Oregon and northern California while also contributing to the broader Pacific Northwest Oak Alliance. Additionally, Jaime will continue working with Rogue Forest Partners and the Northern Blues Forest Collaborative to ensure investments in these large-scale forest efforts pay off for birds and people.

“I am incredibly excited to shift my focus here at KBO. This new role will allow me to increase the integration of KBO’s conservation science and range-wide bird conservation objectives into land management actions guided by local and regional partnerships. Funding for several new oak initiatives has elevated the need for this program area at KBO.” Jaime Stephens, KBO Director of Conservation.

As Jaime transitions into this new role, she will continue to work with KBO’s Science Team to answer the most pressing questions to inform efforts to halt the decline of western birds. As KBO continues to elucidate the causes of decline for at-risk bird species, Jaime will ensure we take the next steps to co-produce outcome-oriented conservation efforts that are inclusive of not only conservation decision-makers but also impacted communities and rightsholders. Through her new role as KBO’s Director of Conservation, Jaime will employ this co-production process to help eliminate what is often referred to as the research-to-implementation gap.

We thank all of our supporters and partners for helping KBO to take this next step towards broad scaled conservation action and continue to grow as a regional, national, and international leader in bird conservation.