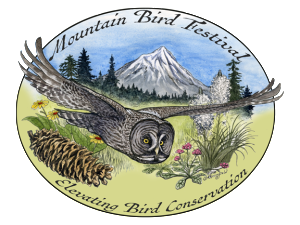 The 2014 Mountain Bird Festival was a huge success.  All attendees served as bird conservationists by helping raise over $10,000 in support of local and national conservation efforts and the science that drives that conservation. Participants flocked from all over the U.S. to bird the Klamath-Siskiyou Bioregion of southern Oregon and northern California. 171 bird species were seen by festival participants, including mountain and pacific northwest specialties such as White-headed Woodpecker, Spotted Owl, Calliope Hummingbird, Mountain Bluebird, and of course, the Great Gray Owl. Additionally, over 90 species of wildflowers were seen in bloom, as well as 21 species of dragonflies and damselflies seen zipping through the region’s diverse habitats. All data from field trips were entered into eBird Northwest, which contributes to our understanding of bird distribution and habitat use. All festival attendees purchased a Federal Migratory Bird Hunting and Conservation Stamp (a.k.a. the Duck Stamp) with their registration, contributing to wetland restoration and conservation throughout the United States; attendees also purchased a Conservation Science Stamp, supporting Klamath Bird Observatory‘s worldwide efforts to advance bird and habitat conservation through science, education, and partnerships. 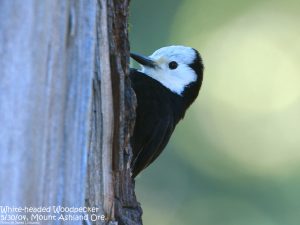 Festival goers will have the opportunity to enjoy all that is offered by the town of Ashland, Oregon. See a play at the Oregon Shakespeare Festival, stroll through town to visit a variety of shops and galleries, get a massage, or enjoy a meal at one of Ashland’s many restaurants that feature local foods. We look forward to seeing you at the 2015 Mountain Bird Festival.

The Klamath Bird Observatory is grateful for your support and dedication.  Don’t forget to tell your friends about this great opportunity to see wonderful birds and contribute to their conservation while at it!

The 2015 Mountain Bird Festival combines a celebration of the Klamath-Siskiyou Bioregion’s spectacular mountain birds and the stewardship ethic needed to ensure thriving landscapes for humans and wildlife. Every citizen who participates in the Festival helps to advance bird and habitat conservation in multiple ways. They contribute to habitat protection through the purchase of a Federal Migratory Bird Hunting and Conservation Stamp (a.k.a. the Duck Stamp), thereby supporting one of the most successful conservation programs in the United States. Festival attendees also purchase a Conservation Science Stamp with proceeds supporting Klamath Bird Observatory’s regional science and education programs aimed at achieving sustainable natural resource management. Additionally, every Festival goer serves as a citizen scientist contributing field trip bird sightings to eBird Northwest, a rapidly growing database that advances our knowledge about birds and their habitats.

This year’s Mountain Bird Festival features a keynote presentation by Cornell Laboratory of Ornithology’s International eBird project leader, Brian Sullivan. Brian will show us how eBird and its state of the art technologies are revolutionizing birding, making this popular recreation a powerful conservation science activity.

The Klamath-Siskiyou Bioregion of southern Oregon and northern California is one of the most biologically diverse regions in the world, an absolute must-see for birders and naturalists. The 2015 Mountain Bird Festival offers guided bird walks to some of the most beautiful and diverse landscapes of the region. Field trips will target highly sought after mountain birds of the Cascade, Siskiyou, and Klamath Mountains, as well as Klamath Basin specialties. Target birds include Mountain Quail, nesting Sandhill Cranes, dancing Western and Clark’s Grebes, Black Terns, Great Gray Owls, Calliope Hummingbirds, and the bird that will be featured on this year’s Conservation Science Stamp, the White-headed Woodpecker.

Click here to view a a copy of the press release announcing the 2015 Mountain Bird Festival.

2013 State of the Birds Report: Bird Populations Depend on Private Lands

A new national report released today by the North American Bird Conservation Initiative, and contributed to by local science-based non-profit Klamath Bird Observatory, highlights the considerable extent to which native bird populations in the United States depend on private lands. Significantly, the 2013 State of the Birds Report on Private Lands also demonstrates that conservation action on private lands is not just for the birds; landowners and the general public benefit from conservation actions that result in cleaner air and water and more resilient and productive landscapes.

Throughout our nation, some two million ranchers and farmers and about 10 million woodland owners look after 1.43 billion acres, or roughly 60% of the land area of the United States. These private lands support more than 300 forest-breeding bird species, and several grassland birds have more than 90% of their distribution on private lands. Waterfowl also depend heavily on private lands. Innovative conservation partnerships are changing the face of private lands conservation as private landowners see real benefits and neighbors follow suit through so-called “contagious conservation.”

In our own backyard, Klamath Bird Observatory is partnering with Lomakatsi Restoration Project, US Fish and Wildlife Service Partners for Fish and Wildlife Program, Natural Resources Conservation Service, and private landowners, and using birds to guide restoration on 2,000 acres of private oak woodlands in southern Oregon and northern California. This unique collaboration—the Central Umpqua-Mid Klamath Oak Conservation Project—received the 2012 Department of Interior Partners in Conservation Award and is restoring one of the West Coast’s most imperiled and biologically rich habitats, benefiting Oak Titmouse, Acorn Woodpecker, and Black-throated Gray Warbler. (To learn more about oaks ecosystems in the Pacific Northwest, download Klamath Bird Observatory and American Bird Conservancy’s Land Manager’s Guide to Bird Habitat and Populations in Oak Ecosystems of the Pacific Northwest, as well as the supplemental guide that features species accounts.)

Klamath Bird Observatory advances bird and habitat conservation in the Klamath-Siskiyou Bioregion and beyond, and has contributed to the high-profile annual State of the Birds reports since the initial report in 2009. Klamath Bird Observatory believes that bird conservation is relevant to every American because the same landscapes that support diverse and abundant bird communities also provide vital services to humans.

John Alexander and Jaime Stephens from Klamath Bird Observatory, and Marko Bey from Lomakatsi Restoration Project, will discuss the 2013 State of the Birds Report on Private Lands on Jefferson Public Radio’s news and information program Jefferson Exchange on Wednesday, July 10th from 9:00am until 10:00am. Tune-in to learn more about what birds tell us about the state of the environment; how these local organizations are working with private landowners to provide benefits for landowners, wildlife, and society; and how America’s famous land ethic—articulated by Aldo Leopold—is being realized.