BLACK TERN POPULATION DECLINES, WATER USE, AND WETLAND CONSERVATION IN THE KLAMATH BASIN

SCIENCE BRIEF: BLACK TERN POPULATION DECLINES — KLAMATH BIRD OBSERVATORY SCIENCE IN THE CONTEXT OF WATER USE AND WETLAND CONSERVATION IN THE KLAMATH BASIN 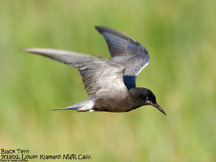 In Part Two of a three-part series on the wildlife refuges of the Klamath Basin and water in the arid West, reporter Jes Burns puts KBO research and monitoring results in the broader context of bird population declines in the Upper Klamath Basin. Click here to read and listen to the Oregon Public Broadcast series.

Results from long-term monitoring efforts show that Black Tern population declines in the Klamath Basin are higher than declines previously documented for continental and regional populations. Results from a 10 year study conducted by Klamath Bird Observatory show a steady, sharp decline in numbers of Black Terns in the wetlands and open waters of Agency Lake and Upper Klamath Lake.

Klamath Bird Observatory Science Director and the study’s lead author Jaime Stephens points out, “Black Tern populations in North America experienced steep declines prior to 1980, likely a result of dramatic wetland habitat loss. The current population is estimated to be about one-third of its historical size — reversing declines has become a conservation priority. Our findings suggest an alarming decline of 8% loss annually at Agency and Upper Klamath Lakes.”

According to a Black Tern conservation plan created in 2006, the desired population objective within the Great Basin — which includes the Klamath Basin — is 10,000 individuals. The current estimate of Black Terns for this area is already some 20% below the objective, making these local declines a red flag. The 2006 Intermountain West Waterbird Conservation Plan was created by many researchers from multiple organizations and agencies to identify and fill knowledge gaps and aid in all-bird conservation efforts. Conservation plans are developed by looking at historic and current population numbers to create reasonable objectives for maintaining populations with the goal of avoiding costly special-protection actions such as threatened or endangered species listing.

Terns are migratory waterbirds related to gulls. Many tern species travel to inland waterbodies to nest and return to coastal areas for most of the year. The Black Tern is one of the smallest terns in the world with a graceful, floating flying appearance. It is a long-distance migrant, nesting in wetlands across the northern United States and southern Canada and wintering along South America’s northern coasts. Black Tern long-term population declines have been attributed degradation and loss of wetland habitat across North America. Now studies must focus on existing habitat suitability, including water levels and water quality.

KBO’s Stephens explained the importance of this study’s results: “It is not well understood how water levels in the Klamath Basin relate to how much Black Tern breeding season habitat is available and how good that habitat is for raising young. Given the challenges that Black Terns face from a combination of water allocation, drought, and climate change impacts, an improved understanding local habitat needs is pressing.”

She added: “The best next step to addressing local Black Tern population loss is to determine the cause of the decline we found.”

The results of the 2001-2010 Klamath Basin Black Tern study were published in the Winter 2015 issue of the Northwest Naturalist journal. To read or download the publication click here.

Klamath Bird Observatory, based in Ashland, Oregon, is a scientific non-profit organization that achieves bird conservation in the Pacific Northwest and throughout the migratory ranges of the birds of our region. We developed our award-winning conservation model in the ruggedly beautiful and wildlife-rich Klamath-Siskiyou Bioregion of southern Oregon and northern California, and we now apply this model more broadly to care for our shared birds throughout their annual cycles. Emphasizing high caliber science and the role of birds as indicators of the health of the land, we specialize in cost-effective bird monitoring and research projects that improve natural resource management. Also, recognizing that conservation occurs across many fronts, we nurture a conservation ethic in our communities through our outreach and educational programs.