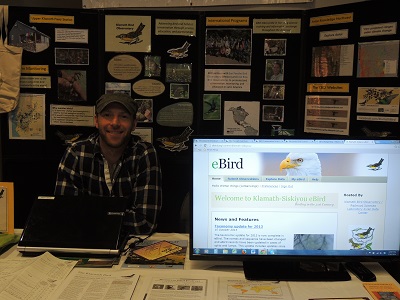 Birding festivals are growing in popularity across the world, and, increasingly, these community events are becoming “eBird Festivals.” eBird is a real-time, online checklist program that has revolutionized the way that the birding community reports and accesses information about birds. eBird festivals use the eBird program to track the many birds seen on the field trips offered during these events that celebrate birds and birding.  eBird Festivals also provide outreach, promoting the use of eBird by helping festival attendees set up their own eBird accounts and providing information about the powerful data entry and exploration tools offered by eBird.  By integrating eBird within festival activities these eBird Festivals are building on a significant opportunity for the birding community to contribute to the science that drives conservation worldwide.

Two of the first birding festivals to adopt eBirding as part of their annual celebrations were the Winter Wings Festival, held in February in Klamath Falls, Oregon, and the Godwit Days Spring Migration Bird Festival held in April in Arcata, California.  These festivals first adopted eBirding as an integral part of their activities in 2008 in collaboration with Klamath Bird Observatory, who at that time created the regional eBird portal, Klamath-Siskiyou eBird. This portal celebrates the globally outstanding biodiversity of the Klamath-Siskiyou Bioregion of southern Oregon and northern California, and  provides stories on the extensive conservation science efforts that have been developed in the region through the Klamath Bird Monitoring Network. This eBird Portal will soon be transformed into eBird Northwest, which will serve a broader geographical area while also acting as the citizen science application of Avian Knowledge Northwest. Avian Knowledge Northwest is a regional node of the Avian Knowledge Network that provides information from comprehensive datasets on birds and the environment for scientists, natural resource managers, and other individuals interested in conservation and science in the northwestern United States.

Between 2008 and 2013, the Winter Wings Festival in southwest Oregon logged 309 checklists documenting 195 species into the regional Klamath-Siskiyou eBird portal.  During this same time period, the Godwit Days Festival in northwest California logged 449 checklists documenting 283 species. A new eBird Festival, the Mountain Bird Festival, will be hosted by Klamath Bird Observatory and held for the first time this spring in Ashland, Oregon. These festivals are nurturing citizen-driven conservation by promoting eBird among their festival attendees and by helping each attendee contribute to one of the largest and fastest growing biological data resources in existence, eBird.

eBird was launched in 2002 by the Cornell Lab of Ornithology and National Audubon Society.